Enfants du Mekong (EDM) is a French non-profit organization offering support to extremely poor children and families who live in South East Asia. EDM aims at educating, training and following children and youth in order to allow them to improve their living conditions and to facilitate their intellectual, emotional and psychological development. Its intervention is focused on seven countries: Vietnam, Thailand, Lao, Myanmar, Cambodia, China and Philippines. The support is based on individual sponsoring dedicated to help the children and youth to cover education expenses. EDM also proposes a collective sponsoring plan designed to support a school, a family unit, or a group of children. In terms of implementation, EDM allocates the sponsoring funds to different programs run by its local representatives. As of today, there is a total of 60,000 children under support from EDM and over 21,000 being sponsored by the organization.

Beginning of April, HOST-NGO formulated a partnership proposal to EDM in order to reinforce the support offered at the SDC. Following our proposition, Marie, the local coordinator for Negros area, came to visit the SDC project in Bacolod City. Marie was able to meet with our team as well as SDC's local team, in particular with Paolo, one of the two social workers in charge of the individual follow-up of the children in conflict with the law.

We also discussed about details related to the possibility of setting-up individual and collective sponsoring schemes. Two types of support have been requested so far to EDM: a school sponsorship for children and youth exiting SDC and reintegrating their families, and a collective sponsorship dedicated to fund the educational and social activities within the SDC. It seems that the first proposition would be the easiest to implement according to the current strategy of EDM. However, the local coordinator of EDM still needs to report on her on-field visit to her managers, prior to reaching any concrete agreement. We are all hoping that the partnership comes to a reality within the end of the year!
Posted by BACOLOD COMMUNITY DEVELOPMENT PROGRAM at 5:44 PM No comments:

The summer holidays have started as it is getting increasingly hot in the Philippines. The first batch of UNO-R students have now completed their volunteering mission at the SDC. Over the last six months, two social worker students, two psychology students, and a group of criminology students have put a lot of energy in supporting the SDC.

The psychology trainees spent time and devotion for the SDC children within a comprehensive support program, which included various objectives: enhancing the children's creativity, cooperation and thinking skills, helping on their social and emotional concerns, regaining their self-esteem and facilitating their social integration, teaching them about their social roles and responsibilities, and building coping skills. The skilled and passionate young social workers offered their dedicated and tailored support to the children. They worked on developing their physical and creative skills, assisting the children’s concerns regarding the status of their legal cases, helping them to reconcile with their families, and also emphasizing on the importance of education. Also, the criminology students effectively helped to improve the children's awareness on legal enforcement and childrights, to develop the children’s physical skills through sports activities, as well as to ensure the children's safety and security within the center.

A 'despedida' (local dialect for 'farewell') was organized at the end of their placement at the SDC last month. The Peace Corps volunteer, deployed at the center, along with Virlanie and HOST-NGO team, awarded the students with certificates of appreciation. This farewell party was quite emotional as the kids thanked them for their involvement and gave them plenty of hugs! The University of Negros Occidental-Recoletos (UNO-R) also organized a recognition ceremony for their partners, which include the SDC. As a fully involved organization at the SDC, our team was requested to share with the audience the importance of the students' resources dedicated to this public center, and to explain how the People-Private-Public Partnership (PPPP) concept could benefit to every stakeholder.

Our team is now looking forward to welcome the next batch of UNO-R students in June to share new knowledge and experiences with the children and staff at the SDC. 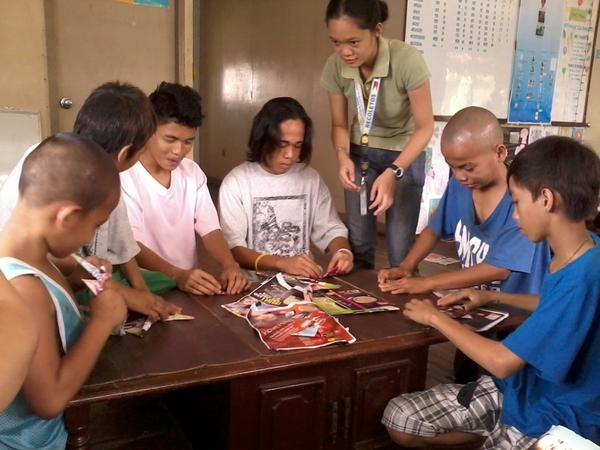 Posted by BACOLOD COMMUNITY DEVELOPMENT PROGRAM at 5:16 PM No comments:

This month, we are taking on a very important challenge: Global Giving Open Challenge!
Global Giving is a charity fundraising website based on crowdfunding, which gives social entrepreneurs and non-profits from anywhere in the world a chance to raise money to improve their communities. We have been selected to enter their challenge in order to get the opportunity to become member and have full access to their fundraising tools and services.

Our challenge is to raise at least US$ 5,000 from a minimum of 40 donors in one month, starting on April, 1st 2013 and ending on the 30th. We are displaying a project focusing on supporting the street children of Bacolod City and reinforcing the rehabilitation opportunities available to help them access better living conditions: access to accommodation facilities, fulfillment of their basic needs, education and training, health and medical care, etc. This project is in line with the SDC project, which is under implementation at the Social Development Center in Bacolod City. Our final fundraising goal is US$ 20,000 to address the critical issues faced by street children in everyday life.

As far as today, within about 10 days, 21 donors have enabled us to raise US$ 1,540, i.e. US$ 3,460 are left to succeed in the challenge. Your support is critical in that attempt. We would like to encourage you to visit the project and make a donation – even though you think it is a small one. Every small step counts to build a long path!

Please follow the link below and do not hesitate to contact us if you need further information on this initiative. We wish to warmly thank you for your generous and essential support!

Posted by BACOLOD COMMUNITY DEVELOPMENT PROGRAM at 10:28 AM No comments:

Since the launching of aikido activities at SDC last August, the interest of the children has been growing despite the initial doubts raising from the local staff and some neighbouring communities. Indeed a few people have been worried that this new program would actually promote the use of violence for these young teenagers who are already invoved into a violent environment. However it rapidly proved that there would not be any negative outcome generated by this activity. Mostly used to practicing basketball, the children really appreciate this new way of getting conscious of their body while stimulating their mind. Mind setting is a major factor in the practice of this martial art which was created in the 1950's aside to ju-jitsu, kenjutsu (art of saber) and aikijujitsu (art of harmonizing energies). A healthy mind in a healthy body: these are two inseparable and complementary entities!

Week after week, around 15 children have been initiated to the various self-defense techniques taught by the team of volunteers from Warriors For Peace (http://bacolod-partners.blogspot.com/2012/08/conflict-management-prevention-with.html). The latter made sure that the children were mature enough to adopt a non-violent approach in order to prevent any risk of incident between the young people and also toward the staff. 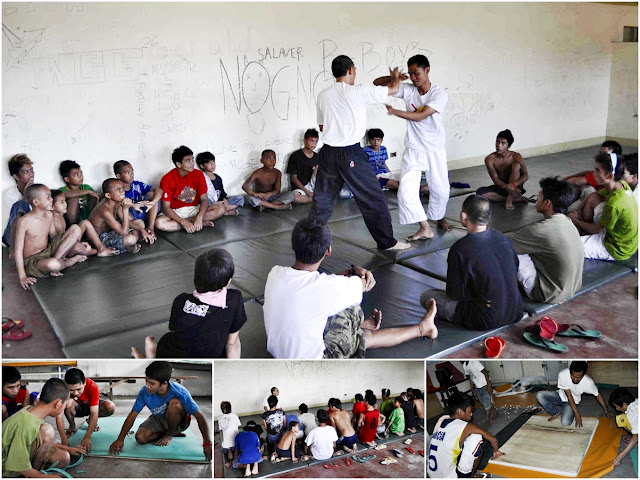 The 12 matresses required for the practice have been funded by HOST-NGO, thanks to our generous donors. In order to educate the children on the importance to preserve the equipment at the SDC, and also as a way of reducing the costs, they have been involved into the making of the matresses. Kenneth L. Materum, volunteer from Warriors For Peace, and one of our volunteer from HOST-NGO, have run the workshops teaching to the children how to assemble the plywood slabs with the layers made of rubber and styrofoam, which were then wrapped with vinyl plastic.

The frequency of the sessions has been increased to twice a week at the SDC. The practice room has become an actual Dojo with this new equipment, which enabled to set-up the same routines as the ones to be found all over Asia and throughout the world. The practice has also been enhanced with the viewing of documentaries on aikido. This program is already successful as some of the young participants are willing to enter a Dojo when they will leave the center. Warriors For Peace is committed to help them achieve that goal. This will be an amazing reward considering the patient and passionate contribution from Warriors For Peace, which has been striving for years to promote peace and dialogue between the communities on the Negros Island.
Posted by BACOLOD COMMUNITY DEVELOPMENT PROGRAM at 2:06 AM No comments: