Hardly encouraged to express themselves and not really used to being congratulated for their actions, the children cared at the SDC often have low self-esteem, which may result in anger and violence. It is actually the usual reason why they are admitted at the center.

Following a long-term observation period, Virlanie-Bacolod's team has assessed the increasing need of the children to express themselves via artcrafts and leisure activities: drawing, painting, cutting, modeling, in a word, the need for CREATION. As a complement to the educational and training program implemented at the SDC, it is indeed necessary to focuse also on individual development, which is part of the rehabilitation process.

For a month now, Pastor Arthur Bailes, a local and active artist of Bacolod City who is running CANVAS Gallery, has been proposing his voluntary services at the SDC to hold art therapy sessions for the benefit of every interested child. This new activity has been very successful from the start as 30 children regularly attend the weekly sessions.

The objective of Pastor Arthur is to encourage the children to create and develop ideas of their own on various topics. The first sessions have been focusing on the family and the children were taught how to draw their own cartoon story. Each child was able to address this topic with his own emotions and creative abilities. The children had the final goal of presenting their cartoons to their families on the Family Day, to be held end of September at the SDC. In addition, our psychology interns from the University UNO-R will use this material to better understand the children's profiles in order to address their issues over the psychological support program to be started in November.

The following sessions will be organized around the Masskara Festival, happening in October in Bacolod City. This will be the opportunity to set-up a workshop to make masks out of clay to be decorated with bright and joyful colors. Afterward, Pastor Arthur will conduct mural painting sessions, which will allow the children to bring colors to their housing facilities right at the SDC! 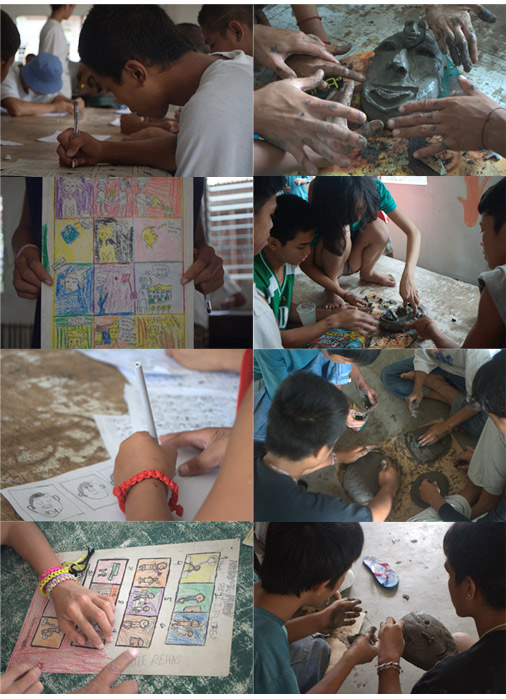 Posted by BACOLOD COMMUNITY DEVELOPMENT PROGRAM at 10:40 AM No comments:

AIKIDO: how to reach harmony and peace 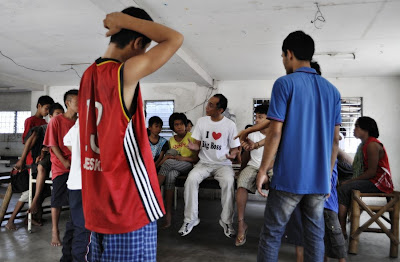 Thanks to the involvement of Warriors For Peace (W4P), a local non-profit organization specialized in conflict resolution and prevention, an aikido program has been implemented for a few weeks already at the SDC. Based on weekly sessions, the volunteers from W4P intend to use this martial art as a mean of pacifying the children and promoting a non-violent approach to deal with conflict. Noël, the Senseï (master teacher), and his two students, Kenneth and Sol, are educating the children and youth of the SDC on aikido's ethical and philosophical frame. In addition to the actual practice, there is also a whole set of rules and values to be observed by the participants.

Aikido, initially created by the Japanese Morihei Ueshiba, means “the way of harmonizing with the universal energy”. This statement is the actual basis of the educational program conducted by W4P at the SDC. Principles and virtues to be taught include humility and gratitude, respect for others, empathy, harmony and cooperation, reconciliation, openness, and integrity. W4P team is using innovative methods to teach and integrate aikido and its unique properties in addressing how the children react to, respond to, work with, and handle issues and difficulties.

The first sessions have been dedicated to teach the children how to avoid conflict and confrontation facing an opponent, and how to select the best strategy to stop him or her. This is not an easy thing to do for these children who often react to violence with more violence, without even thinking of the possible consequences of their actions. They also have to reject their competitive instinct as aikido does not involve any kind of competition and there shall be no fight.

After a few sessions, an increasing number of children are getting voluntarily involved into the activity, even though they were shy and discreet at first. We noticed a great improvement in terms of behavior as the children are more and more focused, listening quietly, participating with calm and positive energy, and showing greater self-control. The volunteers encourage the children to feel more responsible and they expect some of them to progressively step in to lead the activity very soon.

In addition, W4P will dedicate some time to educate and train the team members of SDC relating to conflict understanding and transformation. They would like to increase their capacity to constructively approach conflict and advocate changes toward a non-violent approach. 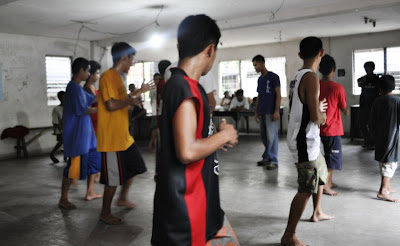 Posted by BACOLOD COMMUNITY DEVELOPMENT PROGRAM at 9:40 AM No comments: