The nationwide famous MassKara Festival is now happening in Bacolod City! The 2013 version opened on the first day of October and will end with the highlights of the MassKara street dance competition through October 18 to 20.

This year’s MassKara theme is “Rediscover and Celebrate Bacolod”. Negrenses are now preparing their fancy masks, colourful costumes and beautiful headdresses to dance in the streets on the drum beats. As it is Bacolod’s tradition, street dancing parties will be happening throughout the month of October. The City of Bacolod will be transformed in a giant party spot, where visitors from the whole nation and even from across borders will join the festivities. The dance contests will be organized at the Paglaum Stadium. The local schools will perform on October 18, followed by the competition of the barangays (city districts) on October 20.

As an historical ritual, Bacolod’s MassKara Festival first started in 1980 as the crisis hit the sugar cane industry all over the Province of Negros Island. Negrense farmers were strongly affected as sugar prices plunged due to a global fall in demand as sugar substitutes were introduced (high fructose corn syrup). Meanwhile a tragedy happened as two tankers carrying many Negrenses collided at sea and sank causing the loss of 700 lives. In the midst of these critical times, the local government and civic groups decided to hold a “smile festival” to prove that Negrense Filipinos could afford to smile in such heavy life events, which marked Bacolod City as the “City of Smiles”. 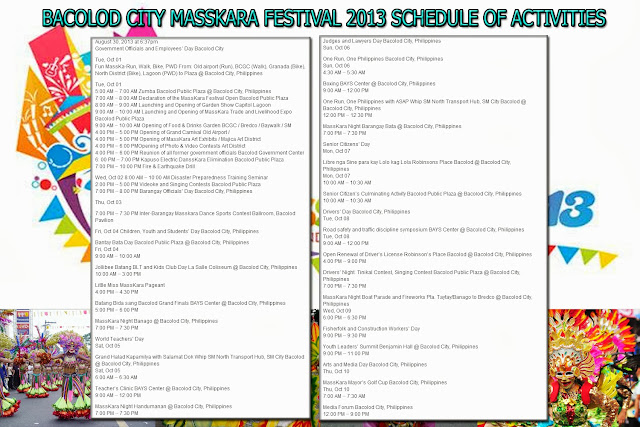 Posted by BACOLOD COMMUNITY DEVELOPMENT PROGRAM at 4:52 PM No comments: