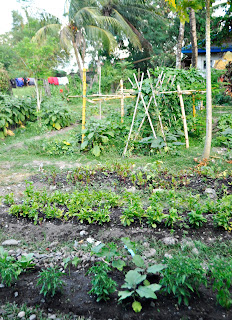 The dry season started a few weeks ago and the SDC's organic garden has been blooming very fast. Thanks to the involvement of some house parents, dedicated to the protection of the nature, the children are now used to take care of this garden, twice a day, and they enjoyed this activity. It is located in-between the girls dormitory and the nipa-ad, which is the traditional bamboo house that serves as a watching and meeting point in the center of the SDC courtyard. Last year, they had been planting medicinal seeds, which allow to treat minor infections. This year, the children can now eat their own eggplants, pumpkins, green beans, chilli peppers, and chinese cabbages.

Mrs. Edna Garde, the Filipina volunteer, who has been coordinating that project on a weekly basis, has definitely succeeded in her mission to raise the awareness of the children on the benefits of gardening. The children genuinely love looking at the veggies growing up. Over the last few weeks, they have been planting tomatoes on the soil previously enriched with compost. They should start producing a new compost with the support of CAPGEM, SDC's partner, whose team will provide all the equipment needed.

Upon six months of running activity, the initial objective has almost been reached: to educate and train the children of the SDC on gardening technics. The first results have already been observed. Four young boys, aged 15 to 17 years old, who were regularly involved and showed lots of attention to Edna's gardening sessions, will enter a community-based rehabilitation program with a gardening certificate signed by their teacher. They have succeeded to acquire the knowledge and skills shared by Edna, which offers them better opportunities to find a job in the future. The labor market of the Philippines remains very informal and every asset counts for a potential employer.

Posted by BACOLOD COMMUNITY DEVELOPMENT PROGRAM at 6:37 PM No comments:

On March 20th, the first team building session was held by Daniel Ress, US Peace Corps, and Kenneth Lee O. Materum, Warriors For Peace, at the New Government Center of Bacolod City. Twenty members of the SDC staff, including Mrs. Gina Castro, Center Head, along with a few volunteers from HOST-NGO and Virlanie Foundation participated into this one-day workshop.
The seminar is part of the SDC capacity building program implemented in collaboration with SDC's partners, HOST-NGO and Virlanie Foundation. Following an assessment phase, several tools have been designed to be used at the center in order to reinforce the team motivation: 'appreciation board', 'Employee of the Month award' and 'community plan'. The objective of the day was to introduce a positive culture within the SDC and to give the opportunity to each staff to express himself/herself. 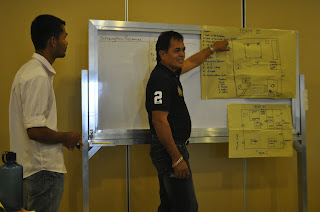 The working atmosphere was friendly and the seminar started with an ice breaker, “The Boat Is Sinking”, which illustrated the necessity of team cooperation and good communication. After this activity, the appreciation board was created to underline every little thing that the team is doing on a daily basis, which contributes into making the center a better place for the kids to live and for the adults to work. The Employee of the Month award was welcomed with enthusiast by the team. Each member was involved to decide on the selection criteria, based on attendance, behavior, listening skills, commitment to work, capacity to take initiatives, etc. The discussion led to the staff agreement on the policy, voting process and type of award. Upon lunch break, the Participatory Analysis for Community Action (PACA) methodology was used to identify and list the strengths and concerns at the SDC. This participatory process resulted in community mapping, calendar, assessment of needs and priority ranking. The children's safety has been ranked as foremost priority to be addressed at the SDC.

Overall this seminar was a success and it highlighted the necessity to conduct such sessions in order to motivate and commit the staff members. Team spirit is indeed one of the most important values to be promoted to ensure the efficiency and effectiveness of our support in development projects. 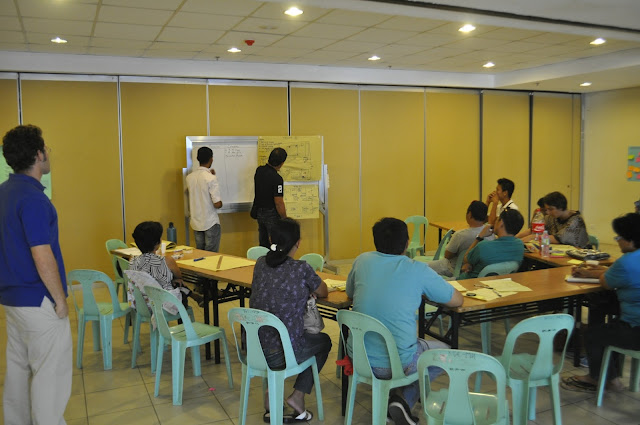 Posted by BACOLOD COMMUNITY DEVELOPMENT PROGRAM at 4:40 PM No comments: 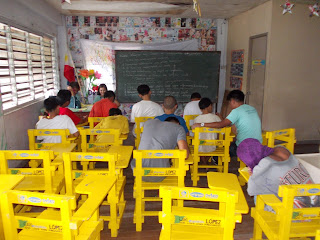 West Negros University has a National Service Training Program in Literacy Development. As part of this program, they ran six Saturday tutoring lessons with the children of the SDC. We were happy to have 22 Teacher Education students help our residents. The children were divided into two groups, those enrolled in ALS and the younger children not enrolled in ALS. The ALS students focused on activities to supplement the ALS curriculum. The other children worked on functional literacy skills that varied according to the children’s wide-ranging abilities and academic experience.

It was very exciting to see this program not only as a welcome addition to our growing education program at the SDC, but also as a support to the building culture of learning at the SDC. The children are very eager to learn and to progress academically, and turnout at the optional tutoring sessions is always above 90%. Even after the tutors left the sessions, several of the children would keep working together to practice and teach one another skills. 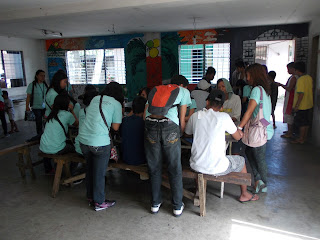 It is now summer break for schools in the Philippines, so tutoring from West Negros University is on hold. However, we hope to solidify a formal partnership over the summer so that we will have tutors during both semesters next school year and in the future. This program holds great promise as a means of bolstering the ALS program and in providing basic literacy education services to the street children and other children at risk at the center, as well as in providing hands-on teaching and community outreach experience to teaching students at West Negros University.
Posted by BACOLOD COMMUNITY DEVELOPMENT PROGRAM at 10:46 AM No comments: 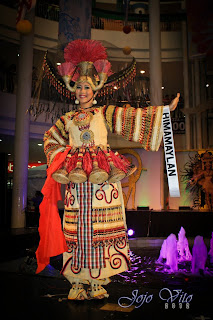 The Panaad sa Negros festival is set to kick off on April 8th and culminate on April 14th at the Panaad Park and Stadium in Barangay Mansilingan, Bacolod City. This is the biggest festival of all in Negros Occidental, literally the “festival of festivals”, as it features a total of 32 festivals from 13 cities and 19 towns, showcasing the province's history, culture, trade, agriculture, tourism and other industries.

This festival started in 1993 as a thanksgiving celebration and a fulfilment of a promise and vow to the Divine Providence in exchange for good life. Held every third week of April, it has been awarded the Best Tourism Event (provincial level) by the Department of Tourism and the Association of Tourism Officers of the Philippines.

This year’s theme is Panaad @20: Celebrating Negros as the Philippines’ Leader in Organic Agriculture. 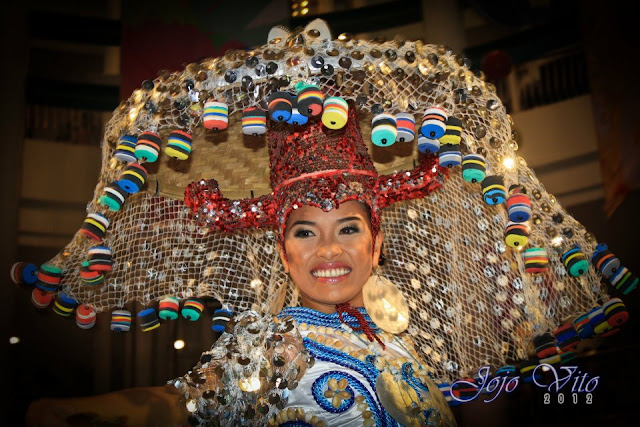 Posted by BACOLOD COMMUNITY DEVELOPMENT PROGRAM at 1:21 PM No comments:

In the province of Negros Occidental, the most common violation relates to poverty, which opposes the most basic human rights of equal well-being. Many organizations are striving to fight this critical appraisal and prevent further violation of human rights. Amnesty International dedicates its activities on raising awareness of the communities on their rights and empowering them to claim their recognition.

On Negros Island, the most active group is based in Iloilo City. The activity has recently decreased in Bacolod City but Amnesty International (AI) team is trying to revive it. Mr. Dennis M. Febre, local coordinator for the region of Visayas, is responsible for developing the local networks of members and following-up on their activities. AI team is currently recruiting new members in Bacolod City to run the campaigns. Members of AI in Philippines shall pay annual membership fees, which allows them to benefit from AI internal resources. The fees range from 50 to 500 Pesos according to the income level of the members.

HOST-NGO is currently considering the possibility of partnering with AI in Bacolod City in order to optimize its intervention in terms of childrights protection and community rehabilitation. The idea would be to mutually share skills and resources with AI local team to follow a common path.

1 Amnesty International is a worldwide movement of people who campaign for internationally recognized human rights to be respected and protected for everyone.
Posted by BACOLOD COMMUNITY DEVELOPMENT PROGRAM at 1:43 PM 1 comment:

Bacolod City has been striving to support the children and youth in conflict with the law for the interest of the whole community. The Ordinance no.566, dated from November 16, 2011, planned the building of a rehabilitation center for juvenile delinquents in Bacolod City. This decision was initiated by the Republic Act no.8369, “Family Courts Act of 1997”, and the Republic Act no.9344, “Juvenile Justice and Welfare Act of 2006”, which require local governments to provide the children in conflict with a law with a specific detention and rehabilitation center, separated from the facilities for adult delinquents. 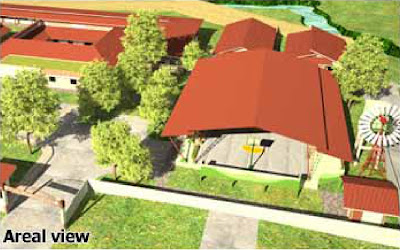 In 2012, Bacolod City selected the construction site dedicated for the Youth Home, located in the Vista Alegre-Granada district. The ground breaking ceremony was held last August by the city representatives with the participation of partners and members of local communities.

The assessment and planning of the Youth Home project has been conducted by city officers along with Virlanie-Bacolod volunteers. This initial phase enabled to specify how the children in conflict with the law will be cared for at the rehabilitation center. Maximum capacity has been agreed to 100 children and the construction plan will integrate the development of renewable energies.

The project has been divided into three main phases: the first one will start very soon with the construction of the first dormittory, a well, a windmill, a water tank, a septic tank and solar panels. The city allocated a budget of PHP 4 Million (Euros 75,000). The public call for bids has been opened in February and the construction is to start in March.

Through the social and professional rehabilitation services, to be provided to young people suffering from critical social issues, the city is sending a strong message of hope to the most disadvantaged communities. The local authorities are willing to dedicate actual and relevant measures in order to assist the communities facing problems often caused by a fast economic development of middle-range to big cities. Bacolod City indeed attracts many migrants from the most remote areas of the province of Negros Occidental.

The Youth Home project will only be achieved if all the members of the local community are involved, i.e. the civil society along with public and private actors, and thanks to the significant support of international organizations and donors. HOST-NGO is currently looking for partners willing to support this project with financial, material or human resources, or also willing to share technical knowledge and skills. For further information, do not hesitate to contact HOST-NGO by email (contact@host-ngo.org) or visit the website (www.host-ngo.org). 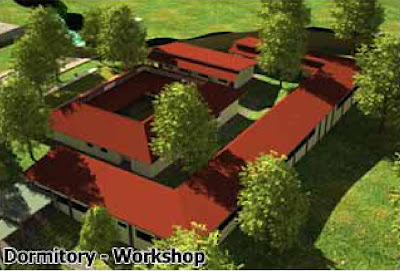 Posted by BACOLOD COMMUNITY DEVELOPMENT PROGRAM at 11:34 AM No comments: